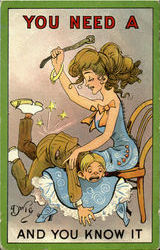 The time is right to revisit the particularly polarizing topic of corporal punishment and review this method of  curbing undesired behavior in children. The essence in a nutshell.

The punishers initial intent is to inflict just enough damage to force the recipient to  reform and repent as a result of the dramatic attention-grabber. The amount of force is determined by the expertise of the deliverer of the punishment. If any lines are crossed, the intended beneficial effects of the flogging supersede any miss-calibrations by the authority figure. Crying, screaming, pleading, and air dancing do not generally deter the preconceived machine-like ritual pattern of the discipliner. The individual manning the implement is omnipotent and the uber authority on controlled violence.

Strategic goals are two-fold. Initially the sinner needs to be stigmatized. That is achieved by humiliation; the message, there is always someone larger and stronger and wiser than the child. The “anointed one” exhibits his expertise only for the long-term welfare of the child. After that is achieved, the enforcer can concentrate on their secondary goal of convincing the child that the action, “hurts me much more than it will hurt you,” with the obvious follow-up mantra, “I did it because I love you.” This process assures that respect and dignity will be continually cultivated.

A third super-bonus dividend occurs. Our punished child is now empowered by the recently proclaimed fact that he can indeed hurt his superior. A repeat of the original crime, or a new transgression entirely, will surely bring the loving, rod bearing master back for a command performance. This expression of love is accomplished with renewed vigor and intense passion in succeeding whippings. Histrionics are obvious in this little drama. The choreographed cycle is rehearsed, repeated, and reenacted  until the martyr can endure with only a slight grunt or groan.

With the proceedings now raised a notch, it is only a matter of time until this magical method reaches its glorious climax. Our combatant cannot get a whimper of sound from their loved one. No sound cast at all. Only the popping  of cadence as leather merges with flesh. Our child is a young man now. He can receive the master’s best licks and react with a smile. What a beautiful moment in time, when the child becomes a man and he snatches the weapon away, and stands up to dear old pops. How beautiful life’s lessons are? A boy becomes a man; thank God for the father.